Emergency WA expands to deliver more information than ever

A suite of enhancements to Western Australia’s trusted source of alerts and warnings will give the public greater access to critical information during emergencies. 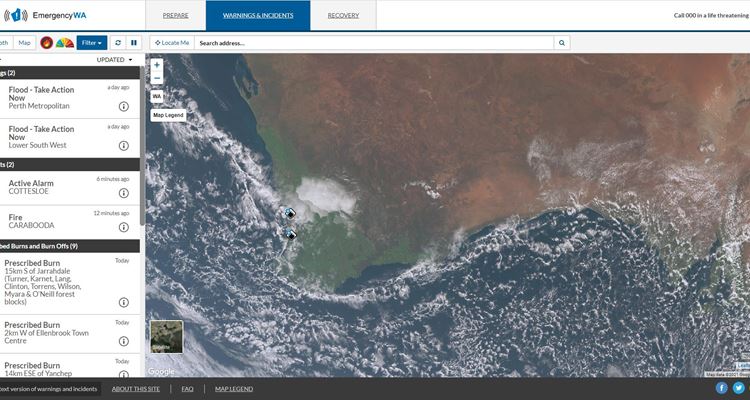 The new features allow users to view weather information from the Bureau of Meteorology (BoM), including wind direction and speed, rainfall, thunderstorm patterns and satellite imagery at the same time as warning information on Emergency WA.

Tracking maps for cyclones approaching the Western Australian coast will now also automatically appear on the website once released by BoM.

Fire and Emergency Services Commissioner Darren Klemm AFSM said the new features were introduced in response to feedback from the public, ensuring Western Australia’s key source of emergency information continued to meet the needs of the community.

“During the most recent bushfire season, a number of people asked how they could access information like wind speeds when putting their bushfire plan into action,” Commissioner Klemm said.

“Providing this data through Emergency WA means the public can access the latest alerts and warnings and simultaneously monitor the weather conditions without having to visit multiple sources.

“During cyclones and severe weather events, we will be able to provide a comprehensive visual tool to complement the preparatory information published on Emergency WA.

“These features will provide greater situational awareness for the public during and in the lead-up to emergencies, which is a critical part of the service the Department of Fire and Emergency Services (DFES) provides.”

The new features can be accessed through Emergency WA’s filter menu, which allows users to customise their view and access other important information like total fire bans, fire danger ratings and prescribed burns.

Commissioner Klemm said people with respiratory illnesses would also benefit from the ability to view wind directions when bushfires or prescribed burns were occurring in their area.

“People will be able to see if the wind is likely to blow smoke towards their location, so people suffering from asthma or other conditions can plan and respond accordingly,” he said.

As part of its commitment to the ongoing improvement of emergency public information, DFES last year introduced the new ‘incident area’ feature – a popular addition which visually demonstrates where active fire has been occurring.

“We’re constantly looking at ways to improve the information we provide to communities impacted by emergencies,” Commissioner Klemm said.

“While Emergency WA is now providing more information than ever, it’s important to remember your safety is your responsibility. Stay aware of your surroundings and don't wait for an official warning or a text message before you act.”

Managed by DFES on behalf of the State Government, Emergency WA is a trusted information source which provides emergency information from multiple government agencies seamlessly through one central source.