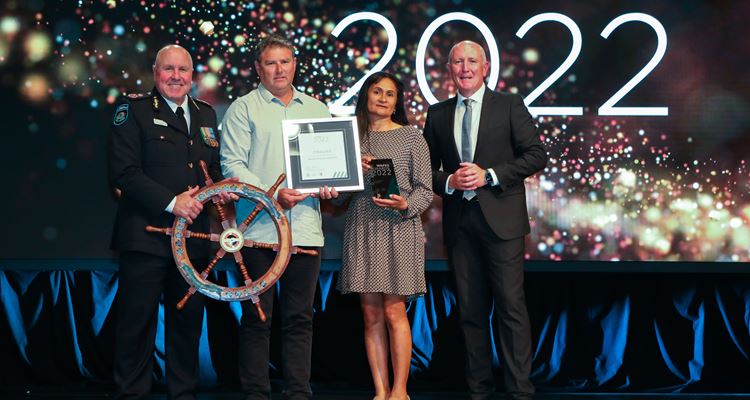 A team of volunteers who played a critical role in the rescue of five people were among the outstanding Marine Rescue personnel honoured at the 2022 WA Fire and Emergency Services (WAFES) Awards.

Marine Rescue Jurien Bay received the Team Achievement Award for their assistance in the rescue near Jurien Bay last year. In treacherous conditions, the team worked alongside other agencies to successfully locate the missing passengers in what was a life-saving operation.

Marine Rescue Dampier Commander Emmie Burton was also recognised for her outstanding contribution to the service, which has seen her become the youngest female Commander in the unit’s history. She is also qualified to deliver more training courses than any other volunteer in the Pilbara.

Carnarvon’s James Cotter, who recently qualified as a rescue skipper, received the Marine Rescue Youth Achievement Award for his dedication to the service.

The 24-year-old has excelled as a Marine Rescue volunteer and won the SES Youth Achievement Award in 2021. He also volunteers for three other services in his area.

“WA’s 37 Marine Rescue teams cover the State from Kununurra to Esperance and have attended more than 1500 incidents in the past 12 months, volunteering an incredible 18,000 hours of their own time to helping others,” Commissioner Klemm said.

“They are highly skilled and provide assistance for search and rescue operations or vessels that have broken down or lost their way, in addition to being a trusted source of advice for boaters planning or navigating voyages.

“I want to congratulate our winners and extend my gratitude to all Marine Rescue volunteers for their dedication to the community.”

The 2022 WA Fire and Emergency Service Awards winners in the Marine Rescue categories are:

At just 24, James volunteers his time across four BGUs while working full-time. He has recently ticked off a personal goal – qualifying as a rescue skipper. He is always the first to put his hand up to respond to a marine incident or take the time to further his skills through additional training and development.

Emmie’s career progression over the past 12 months can only be described as meteoric, becoming the youngest female Commander in the history of Marine Rescue Dampier. A teacher by profession, training is Emmie’s forte and she is now the Pilbara’s highest-endorsed Marine Rescue Pathway trainer assessor. In this role she provides operational and administrative training to Marine Rescue volunteers across the Kimberley and Pilbara regions, ensuring they are ready to respond wherever help is needed.

When a yacht capsized off the coast of Jurien Bay in May 2021, this group was quick to respond to the task at hand. They faced extremely challenging conditions but never gave  up on the task. The operation resulted in the successful rescue of all five passengers, including a child.

Note to the editor: Photos and vision of the award winners is available upon request.