In a bushfire prone State like Western Australia, planned burns conducted by Federal and State Government agencies, local governments, private organisations and individual landholders are essential to minimise the impacts of bushfires.

Planned burns reduce fuels loads (the vegetation that fuels fire) under mild and controlled conditions to decrease the severity of bushfires during the hotter months.

The aim is to produce a low intensity burn that reduces the fuel load without adversely affecting the environment, wildlife or ecosystems.

The Department of Fire and Emergency Services (DFES) Bushfire Centre of Excellence is helping to grow WA’s planned burning capability through new and improved training.

“DFES is committed to developing and delivering sector-leading training programs and draws on the considerable experience of bushfire management personnel and the broader community.”

Training courses are delivered from the Centre’s dedicated facility in Nambeelup and through a network of volunteers and personnel spread across the State who can deliver the products locally.

In 2022, six planned burning related courses are scheduled for delivery and trials of the ‘Burn Planner’ and ‘Burn Controller’ courses will also commence in July.

‘Burn Planner’ equips students with the knowledge and skills to develop a Basic Burn Plan and become a Burn Planner (also known as Prescribing Officer). It is a prerequisite for ‘Burn Controller’ which enables personnel to implement the Basic Burn Plan and conduct a simple, low intensity burn as part of a practical assessment.

The benefits of planned burning were highlighted during January 2022 when a bushfire threatened the townsites of Dunsborough, Eagle Bay and Bunker Bay, as well as cultural, tourism and recreational assets including Meelup Beach and Dunsborough Golf Course.

Fortunately, a number of burns had been conducted around the Dunsborough townsite and golf course by the City of Busselton with the support of DFES in Autumn 2021.

Funded by the State Government’s Mitigation Activity Fund (MAF) Grants Program, these burns meant there was less fuel around assets and access was much easier for crews.

This gave incident managers confidence that crews would hold the southern flank of the fire and that there would be limited impact to Dunsborough residents and the golf course.

Further evidence of the benefits of planned burning has been captured by WA’s Parks and Wildlife Service. 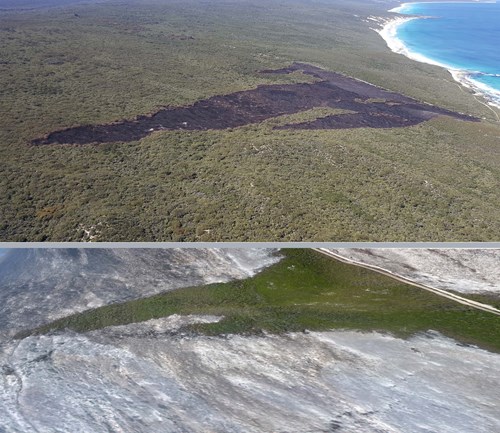 The photo above shows an area of prescribed burning near Hooley Road, Boranup, which was undertaken by Parks and Wildlife Service crews in winter 2016 (top image).

The image beneath it from the Margaret River bushfire in December 2021 shows this same area of green coastal heath, which was the only area not impacted by the fire.

The fact that this area was previously burnt under controlled conditions shows the benefits this has in reducing fuel loads and minimising the impact of an intense summer bushfire. 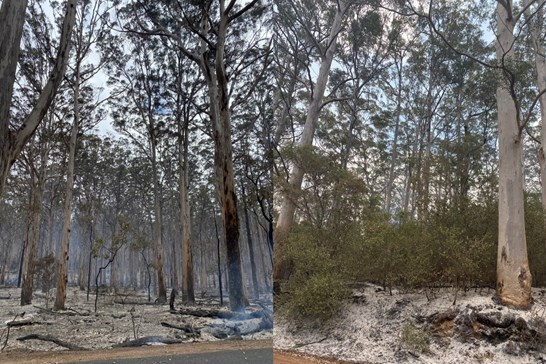 The benefits are further highlighted in the photos above. The picture to the left shows the intensity and impact of the Margaret River bushfire to Karri Forest near Kodak Corner, Boranup.

The picture to the right shows Karri Forest which was back burned during the suppression effort, protecting a lot of the green growth which is pictured at the surface and in the treetops. This back burning is similar to what a planned burn would look like and was critical in saving this part of the forest.

You can learn more about the prescribed burning techniques of WA’s Parks and Wildlife Service at dpaw.wa.gov.au.