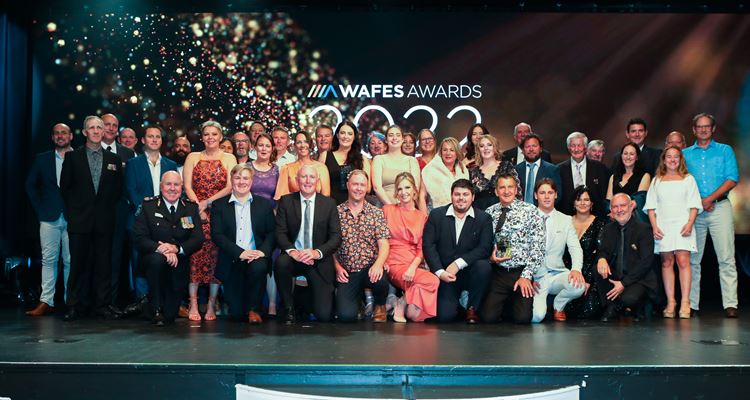 A volunteer bushfire brigade that used social media to support and empower its local community was among a group of outstanding contributors recognised at the 2022 Western Australia Fire and Emergency Services (WAFES) Awards.

An additional four awards were presented at the WAFES Awards Gala in Perth, celebrating the achievements of volunteer and career personnel from Kununurra to Bridgetown.

Edwin Bland of Bridgetown took out the Murray Lang Bush Fire Service Award for his decorated service as a volunteer firefighter over 50 years.

Station Officer Tony Gaynor received the Career and Fire Rescue Individual Achievement Award for a five-week deployment to Fiji, where he offered logistical support to a community grappling with the impacts of COVID-19.

Lieutenant Craig Doyle of Broome Volunteer Fire and Rescue Service was also recognised with the Individual Achievement Award, responding to a remarkable 112 incidents during the 2021-22 financial year.

And 18-year-old Ayden Stenton from Glen Forrest Volunteer Bush Fire Brigade was awarded the Firefighting Youth Achievement Award for his outstanding contribution to the State.

Mr Stenton joined the brigade as a 16-year-old, balancing volunteering with school studies, and has attended major incidents including the Wooroloo and Bridgetown bushfires.

Fire and Emergency Services Commissioner Darren Klemm AFSM commended the award winners and finalists for their service and commitment to WA.

“The recent bushfire season once again proved how vital our firefighters are to the safety of our State,” Commissioner Klemm said.

“In addition to responding to fires and other emergencies, our volunteer and career firefighters are heavily invested in building safer and more resilient communities.

“These awards are an opportunity to celebrate not only our winners and finalists but all Western Australian firefighters who display exceptional actions and qualities every day.”

Ayden was inspired by his firefighter father to join Glen Forrest Volunteer Bush Fire Brigade as a 16-year-old. He has always been community-minded, which drove his interest in educating his community about fire preparedness and led him to become the brigade’s first Community Engagement Coordinator. Ayden relishes helping others and was deployed to Bridgetown in February to respond to a major blaze, assisting local crews and strengthening containment lines.

As a volunteer firefighter for 50 years and an officer for six, Edwin is a seasoned operator and an outstanding contributor to his community. He has worn many hats over the past 12 months to protect and serve his community, including Volunteer Liaison Officer, Intelligence Officer, Blazeaid Coordinator, taskforce member, trainer and member of his local bushfire museum and heritage group.

For Craig, looking after the health and wellbeing of his colleagues is paramount. As the Officer in Charge at several serious road crash rescues, Craig prioritised establishing the objectives of the incident and protecting the welfare of his crew. Craig finds an important role for everyone while taking every possible step to protect them from trauma.

The members of Gelorup Volunteer Bushfire Brigade certainly know how to innovate and educate. The brigade created a fun video with a catchy jingle to educate children in local schools on fire preparedness, ultimately seeking to capture the attention of parents in the process. Led by Glenys Malatesta, this incredible volunteer organization demonstrates a willingness to serve others.

Note to the editor: Photos and vision of the award winners are available upon request.